New Delhi (CNN)November 26 is a bittersweet date for Amrita Raichand. Each year, she is cast back to the events that unfolded 10 years ago today, on the night of her 32nd birthday. It was late Wednesday evening when the former actress turned chef arrived at Mumbai’s iconic Taj Mahal Palace Hotel, along with her husband, his parents, and a family friend. 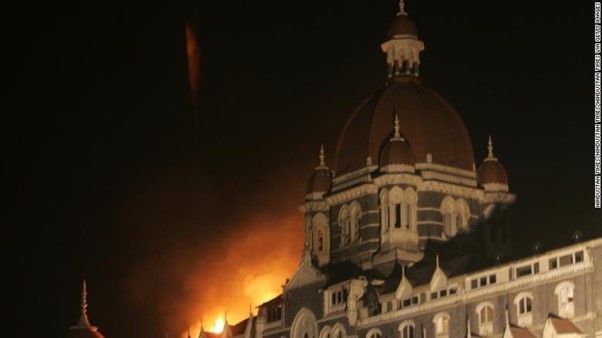 It was a busy night at the hotel, and the restaurant where the group had planned to eat was running behind schedule. The waitstaff apologized and instead the group decided to go to the Heritage Suite on the hotel’s second floor, while they waited for a table.

Unbeknown to Raichand, the small inconvenience would be the difference between life and death.

Not far from the hotel, 10 men associated with the Islamist terror group Lashkar-e-Tayyiba quietly docked at the city’s waterfront, close to the Gateway of India monument.

They hijacked several cars, including a police van, and split into at least three groups. At around 11 p.m., one of those groups entered the Taj Mahal Palace Hotel.

“Destiny played a role that evening,” recalled Raichand. “Within 15 minutes, we heard loud sounds and started getting calls from reception to tell us that an incident was taking place. When we turned the TV on, we realized we were in the middle of a major terrorist attack.”

The attack would become part of what remains one of the most violent and deadly terrorist attacks to have occurred on Indian soil. In total, more than 164 people lost their lives across the city, including 31 at Taj Mahal Palace Hotel.

Women place candles outside the Taj Mahal Palace Hotel, in memory of the victims of the 2008 Mumbai terror attacks.

On the hotel’s rooftop, Bob Nicholls, 54, was eating dinner with colleagues at Souk restaurant.

The South African security consultant and his team of five were in Mumbai to work on security arrangements for the upcoming Champions League Twenty20 cricket tournament.

They went on to save 150 lives during what became a four-day siege.

“We were finishing up dinner and one of my chaps, who wanted to go use the restroom, was stopped by the staff…They told me there was a gunfight going on between two rival gangs downstairs. For safety, they wanted us to stay in the restaurant,” Nicholls, the Founding Director of security firm NSA Global and a former consultant to the South African Police Service’s VIP Protection Unit, told CNN.

As Nicholls began to get a better understanding of what was unfolding, he decided to act.

“It appeared that the terrorists were making their way up the hotel. I saw that the side of the restaurant was all glass. I called my team together and said, ‘Listen, if these bad guys come up here, we’re in a really bad position.’ I took control and asked the guys to get an idea of what’s around us, to make some educated plans.”

Armed with knives, meat cleavers and walkie-talkies from the kitchen staff, Nicholls and his team located a conference room that they could secure. “We went through the kitchen and into this conference room. What we hadn’t realized was there were around a 150 people there as there had been a conference,” Nicholls said. “We barricaded the doors, the elevator on our floor so no one could get up. I had my guys stationed outside, we were feeling confident. The last thing these guys would expect was a bunch of mad South Africans with meat cleavers.”

It’s estimated that around 450 people were staying at hotel at the time of the attack — a third of which were now with Nicholls.

Indian and foreign guests rush out of the Taj Mahal hotel, as news of the attack breaks out.

“ALL OF US WERE IN A DIFFERENT STATE OF MIND”

That conference room was the Rendezvous Banquet Hall, where businessman Dilip Mehta, 65, was attending a dinner.

“At about 9.45 p.m., we went to take the elevator down, but hotel security stopped us saying there was a gang war on the ground floor. We were all quite anxious about what was going on but soon found out through the TV that it was a terror attack,” Mehta, Managing Director of Pegasus Shipping, told CNN.

“A few people were calm, some had fainted or were in a state of shock under the tables. The bomb blast, the sound of gunfire and the fire engulfing the area was so shocking. All of us were in a different states of mind. I was extremely worried about my mother, my two daughters and my wife, they were all crying,” said Mehta who had been able to call his family at home.

For the next nine hours, the group could do nothing except wait with the lights turned off and the door shut. Every 20 minutes, Nicholls and his team would update the group to ensure everyone remained calm.

Several floors below, Raichand and her family were still in their suite.

“We could hear everything, we could hear people running. These are the moments when you really reiterate your faith in God, but none of us were panicking.”

“I was thinking about who was going to take care of my child because his entire family is here. Death is inevitable but it would have been too unfortunate for my little baby to be left alone without his family,” said Raichand, who had left her one-year-old son at home with his nanny.

The Taj Mahal Palace Hotel, which dates to the early 1900s, suffered extensive fire damage during the attack.

As the situation intensified at the Taj Mahal Palace Hotel, plans were underway to make an escape.

After a loud blast, Nicholls saw fire and smoke billowing from another section of the building.

“My concern was whether they had plans to blow the whole building up. If the fire came to our part of the building, we wouldn’t be able to get out. We have a fighting chance against terrorists but fire is a whole different ballgame,” said Nicholls.

With 150 people under his watch, any attempt to leave the hotel was going to be a challenge.

“I told everyone that we were going to go down the stairs very quietly. But with 150-odd people on a staircase, we were like sitting ducks. Two of my guys went ahead to make sure it was safe, we had two guys at the back. We’d move down to one floor, check the floor and then get everyone down. We did the same on the next floor. It took quite a while to get everyone down. We got out at around 3 or 4 in the morning,” said Nicholls.

“We were asked to take off our shoes to avoid making noise because we never knew if there were still terrorists around who could hear us. No one spoke either,” Mehta recounted.

A few hours later at 7.30 a.m., Raichand and her family were climbing down ladders put up by firefighters.

The city remained under siege for the next three days.

“None of us slept. We were glued to the news. Chabad House was right next to our home. We could still see the fire from the Taj. We were witnessing everything,” said Raichand.

Employees and guests of the Taj Mahal Palace Hotel are recued by firefighters as fire engulfs the building’s top floors.

“I GO TO THE TAJ EVERY YEAR FOR MY BIRTHDAY”

For many of the survivors, the weeks and months that followed proved to be tough.

“I was traumatized for almost six months. I used to get up at night at 3 a.m., and just hold onto my bed. I’d get nightmares and hallucinations. I wasn’t myself,” said Mehta.

Given the nature of his occupation, Nicholls took a more pragmatic approach and arranged for counseling sessions as soon as he and his team returned home to Johannesburg.

“At the time, we literally switched into work mode. There were moments of uncertainty because we realized we’ve got this room full of people that we’re making decisions for,” Nicholls reflected.

“It’s what we do for a living. It wasn’t a decision that we made. It was almost an instinct.”

But time is a great healer, Mehta says, and the events from a decade ago have offered him a fresh perspective on life, he tells CNN. “My objective now is to give back. There’s a purpose for me to be here. My life took a 360 degree turn,” he said.

Richard too decided to face her fears.

“For the next four, five years I couldn’t celebrate my birthday. But now, I’ve taken it in my stride and I go to the Taj every year for my birthday.”